Maine Jewish Museum reopens with exemplars of art and craft
The first exhibition at its renovated Congress Street home features 10 artists and makers. 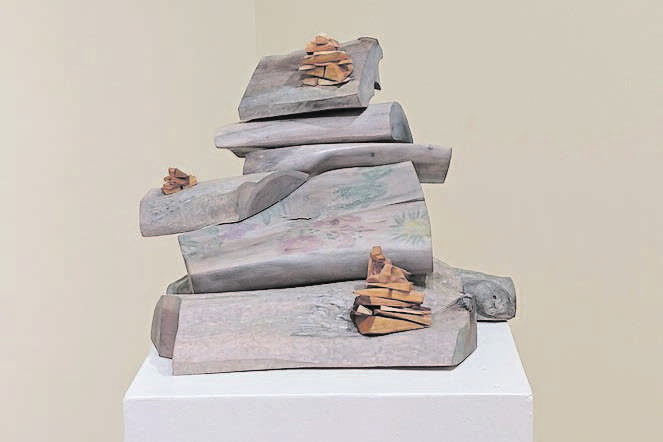 A fire last May at the Maine Jewish Museum forced the institution to find other exhibition space at the former Nissen Bakery building on Washington Avenue in Portland. But now, with repairs and renovations completed, it is back home on Congress Street. The inaugural exhibition, “Mixing It Up” (through March 19) certainly lives up to its name. Organized by resident curator Nancy Davidson and ceramist and art collector Elizabeth Ruskin, it has no particular discernible theme and ranges far and wide.

If there is any curatorial focus at all, it is the way it navigates a path between art and crafts. I served for some years as chair of a wonderful philanthropic organization called the Craft Emergency Relief Fund+, and our trustees pondered what constitutes craft and what constitutes art ad nauseum. Having also edited a magazine about American craft in the 1980s and attended hundreds of craft shows, I can say there is work here I would expect to see in those venues.

Frankly, at this point the discussion of “what is what” has become a bit tiresome. And “Mixing It Up” does not make any attempt to distinguish between them. Generally, this approach is fine. To me, the important thing is that whatever bucket the works in the show fall into, they should be accomplished examples of their category and proud to be so.

But there are times that not being more discriminating can be a problem – namely, when a craft object strives to be something more elevated yet doesn’t quite get there. Some of the work on display here is very good craft, and some of it is technically admirable but aesthetically overwrought, as if it’s trying to be more than it is. This implies some discomfort with the term “craft” or, worse, a pretense to sculpture.

Craft is a perfectly respectable descriptor that should not need to parade as anything but what it is, even if its concern is more artistic than functional. Unfortunately, in a couple of cases, these works detract from the art, because they seem to scream, “Look at me! Look what I can do with this material!”

I bring this up only because the promo card has a tendency to use “sculpture” in a manner that does not always feel accurate. And viewing the show might leave you feeling disappointed, as it sets up certain assumptions it doesn’t live up to. But there is really excellent work here worth seeing, whether you call it art, craft or something in between. There are 10 artists and makers – almost all Mainers – in the show, so I won’t mention them all here, but instead point to the highlights.

Linda Gerson is represented by works on paper that are unquestioningly art. Her medium is mixed (she talks about her process as collage) and her style is abstract, though some pieces, such as “On the Edge,” have intimations of a landscape. They have a wonderful sense of dynamism to them and a lucid, lyrical manipulation of color and form. Some can feel dream-like, which is not surprising, since she cites her dreams as one inspiration. Gail Spaien is a well-known painter of domestic scenes: a table and chairs on a covered dock by the water, a collection of vases in front of a window.

With their simple themes, matte colors and flattened planes, they have a kind of charming innocence that makes them pleasing to the eye, which belies the effort it takes to realize them on the canvas.

Lin Lisberger is an equally recognized sculptor, and her “20 Walks–Baldface” is particularly interesting.

Made of chiseled logs stacked on each other to mimic the peak in the White Mountains of the title, it simulates this geological feature. But it also possesses an elegiac quality thanks to smaller mounds of wood pieces that suggest the cairns left in hikers’ wakes. Colored pencil drawings of flowers, evergreen branches and other flora drawn onto the logs reference what might normally be growing here, either as underbrush or overhead.

Despite the card’s description of Ruskin’s own ceramic “Kimono Inquiry” series as “sculpture,”

I look at them more as lovely craft. They are nonfunctional objects, but their emphasis on material, their preoccupation with pattern and their decorativeness land them in the craft classification. The kimono is also a kind of thematic obsession in the craft world; I’ve seen the shape in cast glass, fiber, wood and just about any craft medium there is. They are well made, and I could see where a dozen of them hung together on the wall might give them the feeling of an art installation. But on their own they are really more like tiles or plaques than sculpture.

Sometimes distinctions are harder to discern.

The work of Reid Brechner, Jamie Johnston and Sondra Bogdonoff walk a tightrope between both genres. Brechner’s pieces are materials-based (ceramic) and tile-like, which would argue for the craft moniker. But they are also uncontrovertibly paintings, beautiful ones in fact; they just happen to be executed on ceramic.

Johnston, who established the woodworking and furniture making department at Maine College of Art, is technically a craftsperson well-known for his masterfully made custom furniture. Here, however, he uses wood, paint and furniture-making technique to create sculpture that looks like torqued fans or accordions.

Their sculptural presence is undeniable. And some, like “Parrot,” are hung in a way that abstractly evokes their title. In this case you can almost imagine the sculpture as the bird’s wing fanned out for drying after a rain.

Bogdonoff works with the traditional craft of weaving, and some pieces are more akin to that end of the spectrum.

But others, such as “Running Loops,” “Passing Lines” and “Morning Light,” transcend craft with their sense of movement and light. Achieving the quality of inner illumination is a classic aim in painting, and accomplishing it by calculating colors of thread and the warp and weft on a loom seems to require a skill and conceptual thinking that takes them beyond being craft objects.

Undoubtedly, viewers will have their own idea about what genre each work belongs to, and many others won’t care. Either way, it’s nice to see the Jewish Museum’s shows back home.

Jorge S. Arango has written about art, design and architecture for over 35 years.

He lives in Portland. He can be reached at:

WHAT: “Mixing It Up”