Miami-to-Maine STORY FOR FIRST PLAY
Blanco, best known as the poet for Barack Obama’s second inauguration, teamed up with fellow Cuban American writer Vanessa Garcia on ‘Sweet Goats and Blueberry Senoritas,’ a play commissioned by Portland Stage, where it premieres this month. 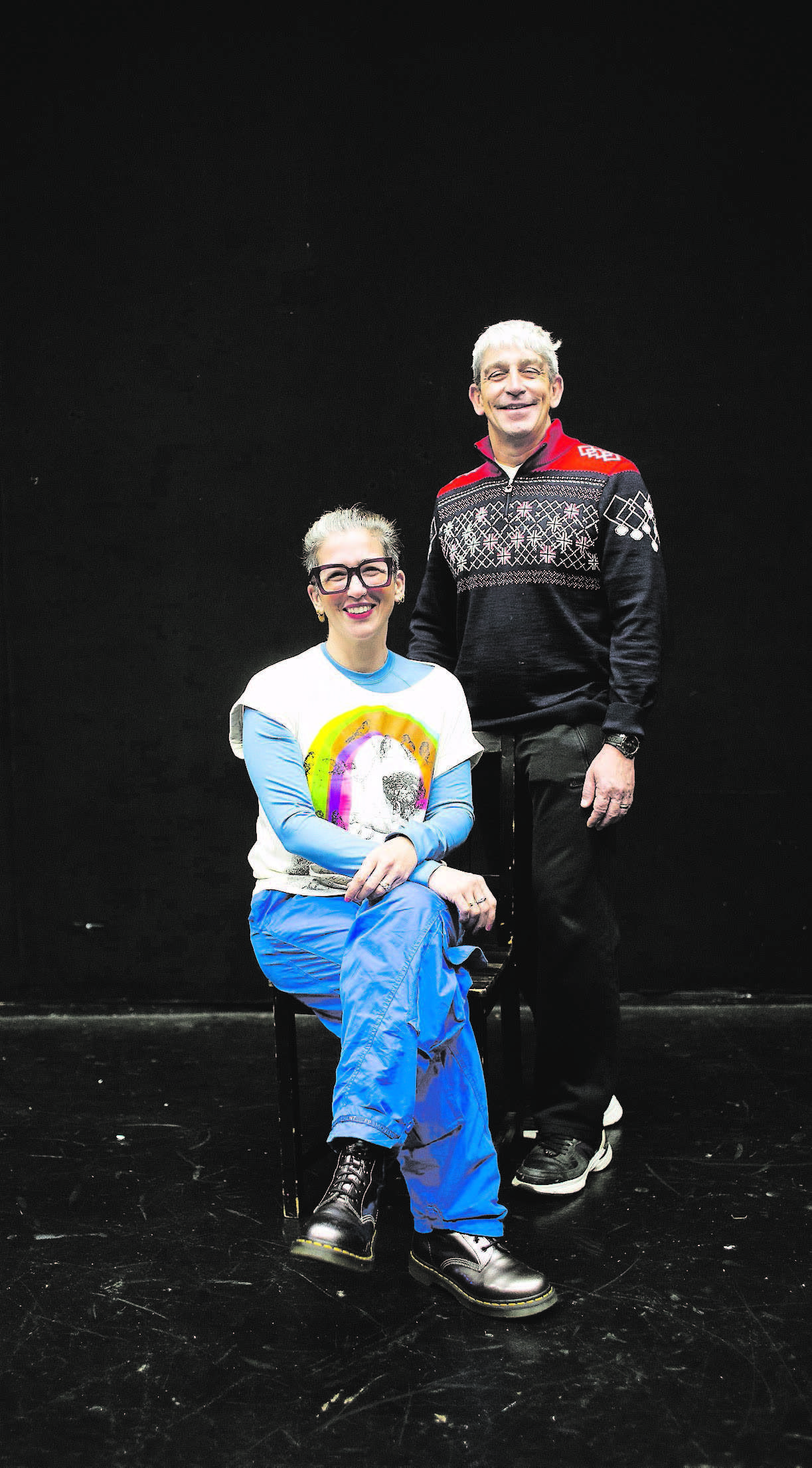 Derek Davis/ Staff photographer Poet Richard Blanco and writer and fellow Cuban American Vanessa Garcia have written “Sweet Goats and Blueberry Senoritas,” which will have a world premiere on Jan. 25 at Portland Stage. 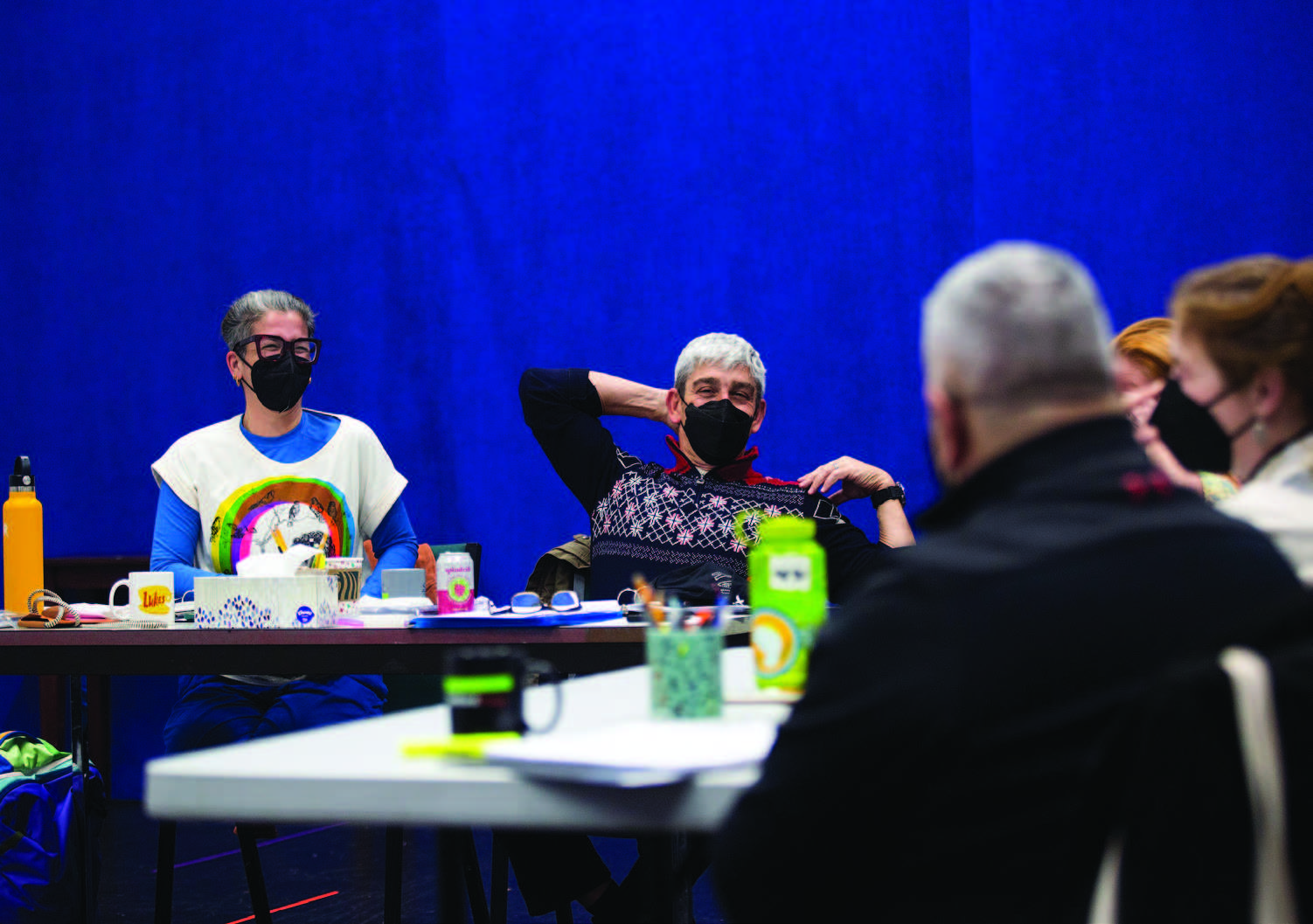 Derek Davis/Staff Photographer Garcia and Blanco at a rehearsal for “Sweet Goats and Blueberry Senoritas” at Portland Stage.
PREVIOUS IMAGE

when poet Richard Blanco moved from Miami to a small town in Maine with his partner 15 years ago, he was prepared for the community to keep him at an arm’s length.

But the opposite happened.

“I’ve never felt more welcome,” Blanco said of his new home, Bethel. “You can’t not be out in a place like that, so immediately we were the two gay guys from Miami.

“But it sort of seemed like everybody was from away in some capacity. It didn’t feel like a stereotype at all. And I became interested in that dynamic.”

Blanco, 54, drew from his experience, and broader ideas about what home means, for his latest work, an original play he co-wrote with fellow Cuban American writer Vanessa Garcia called “Sweet Goats and Blueberry Senoritas” that will premiere at Portland Stage on Jan. 25 and run through mid-February.

Although Blanco has been a renowned poet – most notably, he was chosen as the inaugural poet for President Barack Obama’s second inauguration – this is his first attempt at playwriting.

“I always liked theater,” he said in an interview last month. “As a kid, I was a poor reader … so I read a lot of plays because they were short and I thought, ‘I could get through this.’ ”

As a writer, though, Blanco said writing for the stage was “the most challenging thing I’ve ever had to do in my life.”

“It was like writing blindfold with hands behind my back,” he said.

The play was commissioned by Portland Stage.Artistic director Anita Stewart said the theater was looking for Mainebased writers and stories to support and thought Blanco would be the perfect fit, even though plays were not his medium of choice.

Blanco said he was grateful for the patience Portland Stage provided (he was never given a deadline), but also credited Garcia, a multidisciplinary writer and artist who divides her time between Miami and Los Angeles, for joining the project.

Prior to writing “Sweet Goats and Blueberry Senoritas,”Blanco and Garcia only knew each other by name and reputation. But their shared Cuban heritage made for an easy collaboration.Garcia has written for theater, television and film, as well as novels.

This is the first time she’s been to Maine, though.

“It’s one of the few states I haven’t been to,” she said. “But writing this with Richard, I feel like I have a sense of the people and why they love this place.I’m excited to put my feet on the ground here.”

FROM COMMISSION TO COLLABORATION

“Sweet Goats and Blueberry Senoritas” is set in a small Maine town, not unlike Bethel, the ski resort community Blanco moved to back in the mid-2000s.

The story centers on Beatriz, a Cuban American baker who wrestles with whether to stay in Maine with the community she’s worked hard to develop or return to Miami to reunite with her estranged mother.The pull of her original home and family clashes with the version she found as an adult.

“There is obviously an autobiographical piece for me,” Blanco said. “But I think everyone is looking for home. Vanessa and I both have written from this perspective.”

Added Garcia: “It’s in both of our backgrounds as refugees. There is a strong current of, what do you bring with you, and what do you leave behind?”

The play combines elements of Cuban culture and history with details that are distinctly Maine.

Stewart said when she and other Portland Stage officials were thinking about work to commission, they thought of other plays from Maine-based authors thathave become successful, like John Cariani’s “Almost Maine” in 2004 and Monica Wood’s “Papermaker” in 2015, both of which premiered at Portland Stage.

“It can be really hard to throw it out there and say, ‘Create something,’ ”Stewart said. “The only parameter for the commission was that it had to somehow be about Maine … but you don’t know what’s going to come back.”

Blanco and Garcia teamed up somewhat by accident. Blanco had gone to see a play Vanessa wrote and met her afterward.

“I asked her out for a beer just to sort of get some advice on how to do this … and that became, ‘Hey let’s do this together,’ ” he said.

Garcia said she remembers the drinks as martinis.

“He was talking about his play and trying to figure out how to make it work,” she said. “And then we just started collaborating.”

In Garcia, Blanco found both someone who could understand and write about Cuban culture and characters but also someone who was versed in the technical aspects of playwriting.

“I always create the characters first, because with characters comes story,” she said. “This one felt so easy from the start, just going back and forth. It didn’t feel like work.”

The two worked together in a shared Google document, partly through the pandemic and also while they were working on other things. That progressed to workshops and readings, where the characters started to come to life.

The play’s director, Sally Wood, was brought in early.She’s a veteran stage director in Maine and has been at the helm of six previous world premieres at Portland Stage alone, including “Papermaker.”

Just as the play features elements of Maine and Cuba by way of Miami, the cast is split between three actors who are Cuban American and three who are Maine based, each of whom has numerous credits: Karen Ball, Kevin O’Leary and Dustin Tucker.

Stewart said that was important to everyone involved.

“Actors all feed off one another, so as we bring people in from outside, we get to see different approaches and that feeds the whole ecosystem,” she said.

Blanco said one of the things he’s had to learn is how collaborative theater is. When he’s writing poetry, he’s alone at his table.

“There are no egos.Everyone is on the same team,” he said. “And Vanessa really helped me letgo a little bit and trust the process.”

Blanco was born in Madrid, Spain, to Cuban exiles. His family fled Cuba when his mother was seven months pregnant. The family settled in Miami, where Blanco was raised and where he lived as a young adult.

Moving to Maine was a major life shift, but one for which he has no regrets.His writing career has blossomed here. In January 2013, President Obama chose Blanco to write and read a poem at his second inauguration. Blanco was the first immigrant and gay person to do so.

Shortly thereafter, he published a memoir, “The Prince of los Cocuyos: A Miami Childhood.” More recently, in 2019, Blanco published a book of poems, “How to Love a Country,” which explores his own complicated feelings about loving his adopted country.

“For me, it really speaks to what you carry from the place you came from as you’re forming a new life and new families,” Stewart said.

She said this play is the first that Portland Stage has commissioned, but she hopes it continues.

“It will be great to have a real product to show what we can do,” she said.

Blanco and Garcia are both excited to see their words come alive this month and a bit nervous about the reception.

For better or worse, Blanco said, the play is as personal as anything he’s done.

“That question of home is something we’ve written about, but I feel like somehow this is another way of belonging to Maine,” he said. “It’s a gift to give back to this place that has given me so much.”