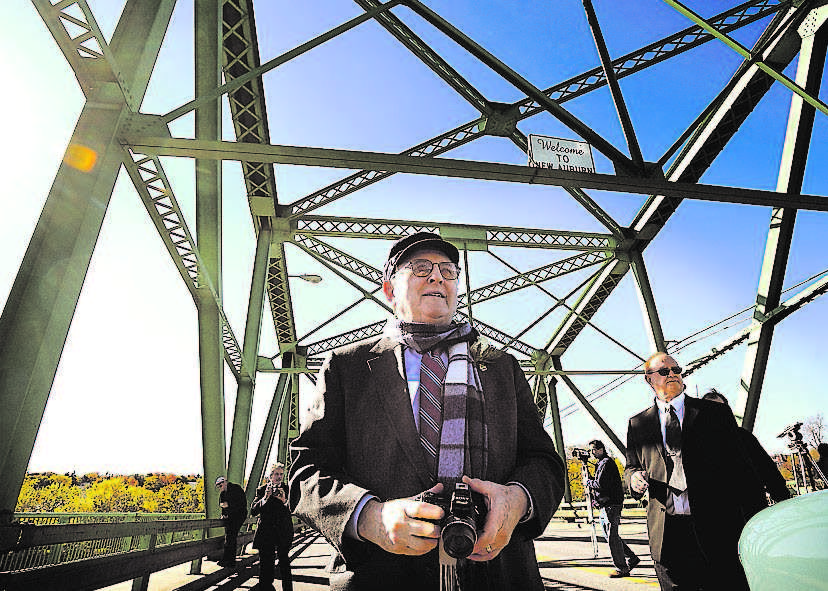 
Dr. Bernard Lown, a widely respected cardiologist with Maine roots who invented the first effective heart defibrillator and whose anti-war activism earned his organization a Nobel Peace Prize, died Tuesday at his home in suburban Boston. He was 99.

Though Lown spent much of his life practicing medicine in Boston, he also had strong ties to Maine. Lown was 14 when his family emigrated from Lithuania to the United States in 1935, settling in Lewiston.

He graduated from Lewiston High School in 1938 and enrolled at the University of Maine in Orono, graduating in 1942 with a degree in zoology.

“Without question, Dr. Lown was one of the most influential UMaine alumni of all time,” said University of Maine Alumni Association President/CEO John Diamond. “Each year we honor an individual or couple with our Dr. Bernard Lown Humanitarian Award, which celebrates those who, like Dr. Lown himself, ‘actively engage in saving lives, relieving suffering, and promoting human dignity.’ “Those qualities define Dr. Lown and his legacy. We are saddened by his passing but grateful for his extraordinary life,” Diamond said.

Lown received his medical degree from Johns Hopkins University in Maryland. He went on to become a professor at Harvard University and a physician at Brigham and Women’s Hospital in Boston, where he helped advance cardiac treatment.

He was among the first doctors to emphasize the importance of diet and exercise in treating heart disease, and he introduced the drug Lidocaine as a treatment for arrhythmia, the Boston Globe reported. In 1962, Lown invented the direct-current defibrillator, or cardioverter, which uses electric shocks to get hearts to resume beating.

Lown was extremely passionate about the threats posed by nuclear war. In 1961, he joined a group of physicians concerned about the risk of nuclear war between the Soviet Union and United States. He founded Physicians for Social Responsibility, serving as the organization’s first president.

The group wrote a series of articles about the medical consequences of a nuclear war.

And in May 1962, the New England Journal of Medicine published an article that received widespread acclaim: “The Medical Consequences of Thermonuclear War.”

“He was quite the inspiration,” said long-time acquaintance Peter Wilk, a Portland-based psychiatrist who serves on the board of the Maine Chapter of Physicians for Social Responsibility.

Wilk traveled to Helsinki in 1985 to attend a conference of the International Physicians for the Prevention of Nuclear War, an organization that Lown co-founded.

Wilk listened to a lecture by Lown and approached Lown afterward to thank him.

“He said, ‘Don’t thank me.’ Instead, he asked me, ‘What are you going to do to save our fragile planet?’” Wilk recalled.

“He inspired me to do this work. He had an impact on hundreds of other physicians.”

In the 1990s, Wilk said that Lown invited him to dinner at his summer camp on Sebago Lake where the men played pingpong outside the home, one of his favorite pastimes.

Former Lewiston Mayor Laurent F. Gilbert Sr., said the death of Lown was not only a great loss to family and friends, but to humanity as well.

Lown returned to his adopted hometown to see state bridge No. 3330, known as South Bridge between Lewiston and Auburn, become the Bernard Lown Peace Bridge in 2008.

Gilbert said he and friend Al Harvie pushed for the dedication of the bridge in the doctor’s name and eventually they became friends of the Lown family. Gilbert, who was mayor of Lewiston at the time, reached out to Lown to get his permission to use his name for the Dr. Bernard Lown Peace Bridge.

“He said, ‘I would be honored and he said, ‘Drop the doctor – just the Bernard Lown Peace Bridge,” Gilbert recalled. “In the naming of the bridge, he and I and Al Harvie developed a real friendship with him, his wife. In the summertime, he would come up to Sebago Lake and we would meet there. He cared about people.”

Lown told the Lewiston Sun Journal during the dedication of the bridge that he took issue with how much money was going toward the wars in Iraq and Afghanistan while needs were being left unfunded at home. It costs $500,000 to fire one Tomahawk missile in Afghanistan, Lown said, the same amount it costs to build 20 schools there. Which, he asked the audience of about 200, paves the way to peace? “I am therefore proud that my hometown is celebrating peace,” he said. “I thank you for honoring me in such a meaningful way.”

In 1985, Lown accepted the Nobel Peace Prize on behalf of the International Physicians for the Prevention of Nuclear War – an organization that Lown co-founded. It was awarded the Nobel for raising awareness about the consequences of nuclear war during the height of Cold War tensions between the United States and the Soviet Union. At its peak, the group had more than 200,000 members and chapters in more than 60 countries.

“To me, you cannot be committed to health without being engaged in social struggle for health,” Lown told the Boston Globe in 2001.

In addition to his groundbreaking work in cardiovascular care, Lown founded an organization that launched a communications satellite in 1991 that was able to deliver online medical training to doctors and health care works in Africa and Asia. He also created a global web-based network focusing on providing up-to-date medical information on cardiovascular care in developing countries, according to a remembrance of his life posted Tuesday on Physicians for Social Responsibility’s website.

“Dr. Lown was a tremendous humanitarian whose vision, innovation and passion made this world a better place and inspired us all,” University of Maine President Joan Ferrini-Mundy said.

Dr. Dora Anne Mills, the chief health improvement officer at MaineHealth and a former director of the Maine Center for Disease Control and Prevention, met Lown when she was a student at Harvard Medical School and he was giving a lecture.

“He was such a renown physician on so many levels,” Mills said. “He was a pioneer in the area of health care that teaches us that health care is not just about taking care of an individual patient, but the larger community and the world as a whole.”

The Boston Globe reported Lown will be buried privately but the family, which includes his three children and a number of grandchildren, will announce a public memorial service later.

Lown returned to his adopted hometown to see state bridge No. 3330, known as South Bridge between Lewiston and Auburn, become the Bernard Lown Peace Bridge in 2008.