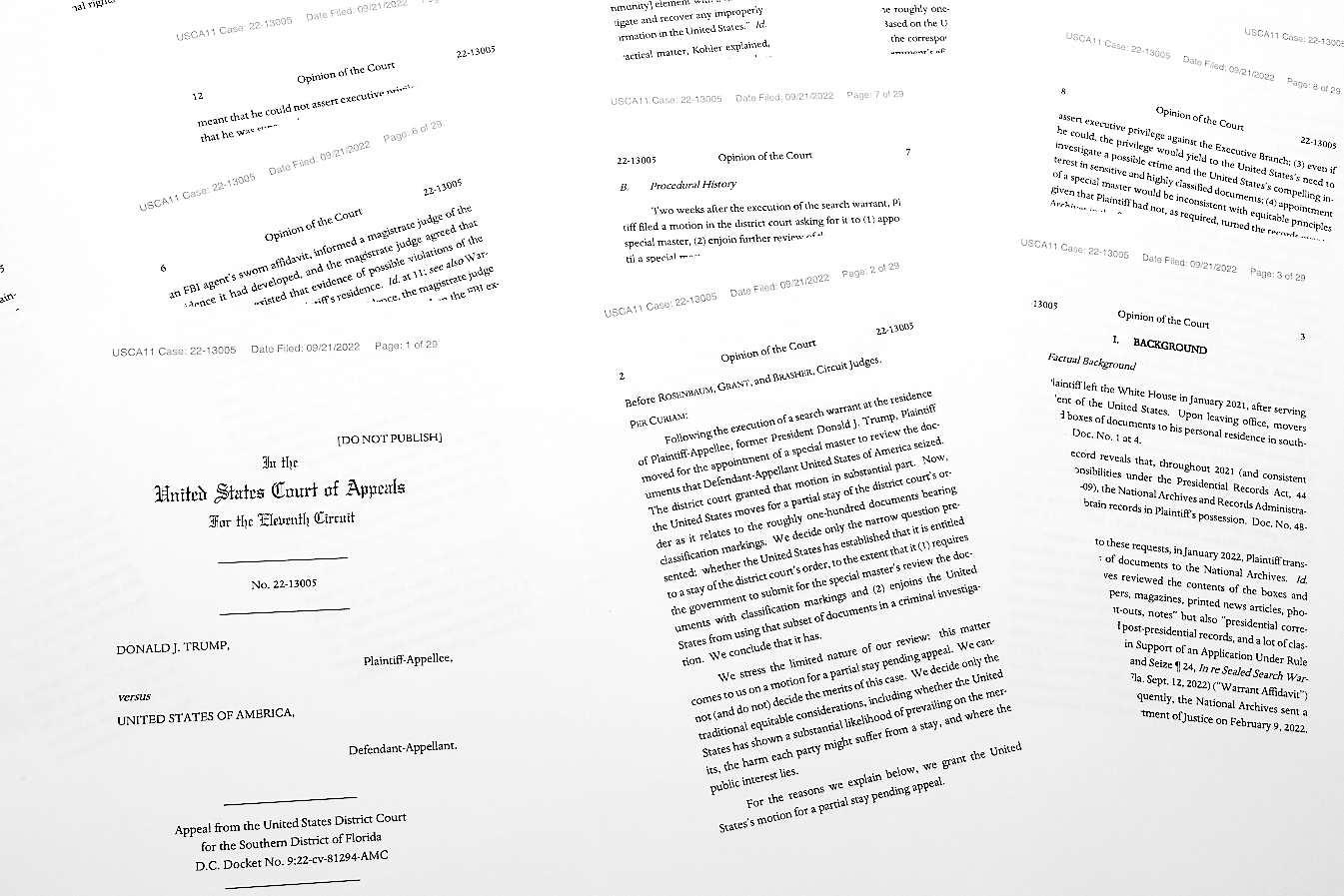 Pages from a U.S. Court of Appeals for the 11th Circuit in Atlanta ruling that lifts a judge’s hold on the Justice Department’s ability to use classified documents seized by the FBI at Trump’s Mar-a-Lago estate.
PREVIOUS IMAGE

An appeals court sided with the Justice Department in a legal fight over classified documents seized in a court-authorized search of former president Donald Trump’s Mar-a-Lago home, ruling Wednesday that the FBI may use the documents in its ongoing criminal investigation.

The ruling by a three-judge panel of the appeals court marks a victory, at least temporarily, for the Justice Department in its legal battle with Trump over access to the evidence seized in a high-stakes national security investigation to determine if the former president or his advisers mishandled national security secrets or hid or destroyed government records.

In the ruling, the U.S. Court of Appeals for the 11th Circuit in Atlanta found fault with Trump’s rationale that the classified documents in particular might be his property, rather than the government’s.

“For our part, we cannot discern why (Trump) would have an individual interest in or need for any of the one-hundred documents with classification markings,” the court wrote, noting that the stay is a temporary decision and should not be considered a final decision on the merits of the case.

The lower court “abused its discretion in exercising jurisdiction … as it concerns the classified documents,” the panel wrote in a 29-page opinion.

Last week, the Justice Department filed papers asking the appeals court to quickly review part of Cannon’s decision in which she appointed a special master to review the seized documents.

Prosecutors have argued that two parts of her order – allowing the special master to review the roughly 100 documents that were marked classified, and halting the criminal investigation surrounding those documents while the special master conducts a review – jeopardize national security interests.

The Justice Department told the appeals court that it disagrees with Cannon’s decision but asked the court to issue a stay of “only the portions of the order causing the most serious and immediate harm to the government and the public,” calling the scope of its request “modest but critically important.”

Trump’s lawyers countered with their own filing, urging the appeals court not to intercede, suggesting that the documents may not in fact be classified and if they are, it is up to to the government to prove it.