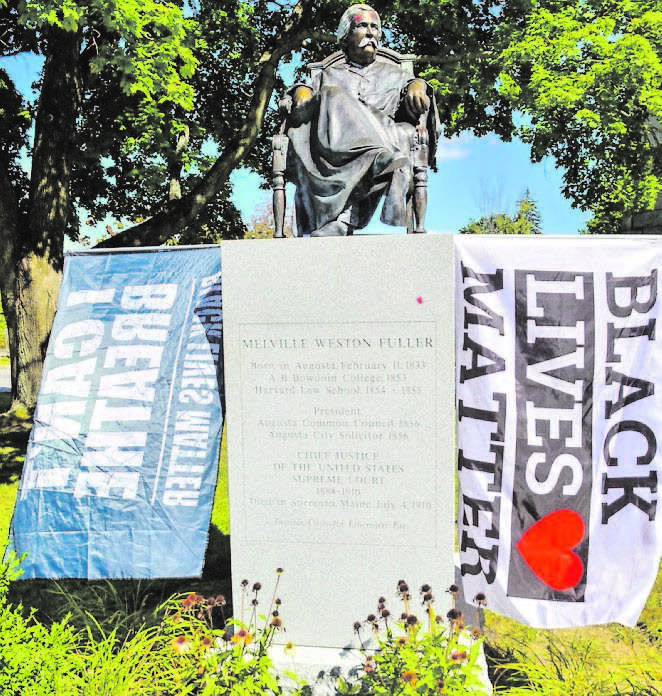 Joe Phelan/Kennebec Journal file
A letter from the Maine Judicial Branch requesting the removal of the Melville Fuller statue in front of the Kennebec County courthouse has sparked public debate. Fuller, an Augusta native, was chief justice of the U.S. Supreme Court when it established the “separate but equal” doctrine in Plessy v. Ferguson used to justify decades of racial segregation in the U.S.
PREVIOUS IMAGE


AUGUSTA — For David Turner, deciding what to do with the Melville Fuller should be simple.

“I don’t think we should move it,” said Turner, who now lives at the Augusta house where Fuller grew up more than 150 years ago. “I think we should destroy it and melt it down and make plumbing fittings from it.

That’s my opinion on it.”

Turner was one of 16 people who spoke Tuesday at a public hearing hosted by the Kennebec County Commissioners.

The fate of the memorial to Fuller, who grew up in Augusta and went on to become chief justice of the U.S. Supreme Court under President Grover Cleveland, has been debated since at least August, when the Maine Judicial Branch sent a letter to the Kennebec County Commissioners requesting that the statue, placed outside the Kennebec County courthouse in 2013, be moved.

Neither the statue, commissioned by Robert Fuller Jr., nor the property on which it sits belongs to the judicial branch. Fuller, who is Melville Fuller’s first cousin three times removed, presented it as a gift to Kennebec County.

As chief justice, Fuller presided over a court that established the “separate but equal” doctrine that paved the way for decades of racial segregation based on Plessy v. Ferguson, a landmark decision that upheld the constitutionality of segregation laws for public facilities if the segregated facilities were equal in quality.

Fuller did not write the decision, but sided with a majority in the case.

In a series of protests this year across the United States, thousands have protested violence against Black people, in some cases at the hands of police, through the Black Lives Matter movement.

Protests have resulted in the removal of statues of Confederate Army officers and soldiers, Christopher Columbus and many who supported racist policies.

Acting Chief Justice Andrew Mead, writing on behalf of the Maine Supreme Judicial Court, said state judicial officers believe the statue, in its current location, “is not consistent with our values, because the association between Chief Justice Fuller and the Plessy decision is so profound, and Maine judges do not want to be linked to that association.”

“Given our commitment to racial justice,” Mead wrote, “we should take every opportunity to examine and re-examine our positions, policies and practices.

We believe that the statue should not continue to be the monument that members of the public see as they approach the courthouse.”

Tuesday’s hearing arose from that letter.

Steve Smith, a lawyer representing Fuller, urged people to view Melville Fuller by the standards of his time.

“The problem that I see is that our country, indeed any history, is composed of a tapestry of heroes and villains, but mostly people in between striving to do their level best,” Smith said.

“I think from (Fuller’s) perspective, the Plessy decision was, in fact, a progressive position. We don’t see it as such today, but the idea that Black Americans could be seen as equal was in that time a progressive stance.”

“So I’m going to try to not be the angry Black person in this meeting, but that’s going to be kind of difficult,” he said. “I have living relatives who lived through segregation and racial terror and state violence, because that is the actual outcome of Melville Fuller’s decision on that court.”

Moses said the fallout has been seen in police overreach and the racial wealth gap that exists today, long after the court overturned the Plessy decision in Brown v. Board of Education of Topeka.

“You don’t need a statue to learn these lessons,” Moses said. “You just got to listen to the people who have experienced them on a regular basis.”

Moses’ condemnation of the statue was shared by Michael Alpert, who was acting as spokesperson for the Maine branches of the NAACP.

“That single court case did more harm, did more to harm America than any other Supreme Court ruling,” he said. “Since the country’s founding, many of us are familiar with the aftermath of the Plessy decision: Daily humiliation, segregation, lynchings, lack of voting rights, denial of decent education and adequate housing and fair employment and proper health facilities.”

Leah Baldacci, a Maine lawyer and investigations counsel for the conservative Legal Insurrection Foundation, said Fuller’s legacy exists in his management of the justices and collegial traditions he established, including having justices shake hands when they meet. The statue, she said, is a reminder that checks and balances exist.

She said the statue should be viewed “not just through the lens of racism, but through the lens of what makes America great, which is our system of checks and balances, and the fact that the Supreme Court, in its wisdom, was willing to overturn precedent, as it did in a Brown v.

Baldacci said the issue is being raised now, seven years after the statue was erected, because the Maine State Bar is being “heavily charged” with trainings and rhetoric surrounding critical race theory. Through her work at the Legal Insurrection Foundation, she said, she is researching the theory and what she says are its Marxist foundations.

Several speakers, including Augusta City Councilor Linda Conti, who said she was speaking on her own behalf, suggested the statue could be moved to another site, perhaps the Kennebec County Historical Society.

Another suggestion was to move the statue to the Maine State Museum, or add a plaque to offer some context on Fuller’s career.

Robert Fuller Jr. said that under Fuller’s leadership, the Supreme Court became a crucially activist court and an equal partner with the executive and legislative branches, and highlighted Fuller’s legacy in other decisions on which he presided, including a finding that property rights rendered to Native Americans could not be overridden by an act of Congress.

Fuller thanked the commissioners for conducting the hearing, and applauded those who participated, thus exercising their First Amendment rights.

County Administrator Robert Devlin said a date for that discussion had yet to be set.